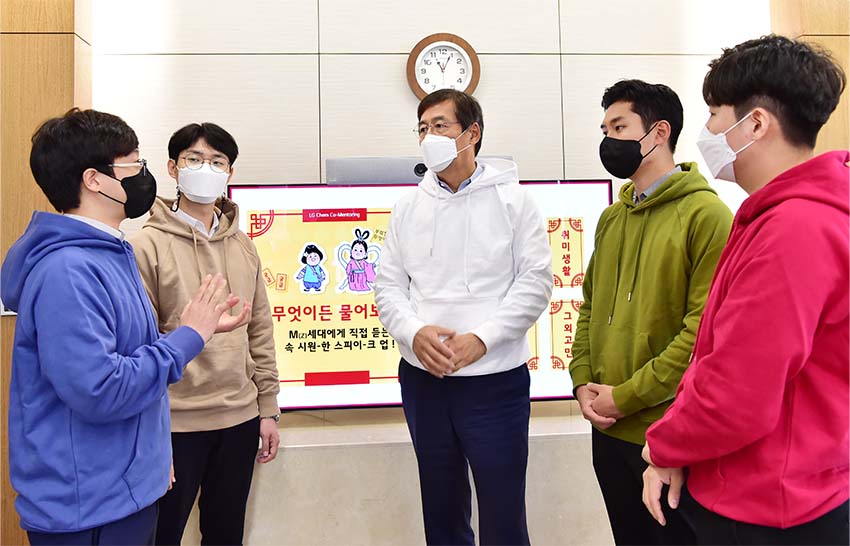 Do you wish to participate in the Squid Game and a virtual overseas tour?LG Chem hosts ‘co-mentoring’ event, management and MZ generation employees become mentors for each other

■ On the 20th, CEO Hak Cheol Shin learned MZ generation culture such as ‘Mysider, Keep it 100’ and received communication advice from entry-level/specialist employee mentors born in the 90s.

■ 110 entry-level/specialist employees with an average age of 29 and 30 executives were selected through a voluntary application process. Two-way co-mentoring to take place for 3 months.

■ CEO Hak Cheol Shin,“True cooperative synergy can only be created when mutual understanding and empathy are obtained through communication.

We will continue to innovate new communication methods to achieve understanding between generations.”

LG Chem is hosting a ‘Co-Mentoring’ Program where the Company’s top management and young MZ generation employees become mentors to each other.

As the starting point, on the 20th, CEO Hak Cheol Shin received mentoring from four young employees comprised of entry-level employees and specialists.

First, through a ‘balance game’ session on the two options ‘CEO of conglomerate vs. forever a retirement-guaranteed manager’, CEO Shin had the opportunity to listen to the thoughts of the MZ generation, a generation which highly values individuality and respects diversity.

Afterwards, through an ‘Ask Me Anything’ session to freely question on various topics such as work, organization culture, etc., the CEO received tips on how to interact with young employees.

There was also time to learn about new slangs that express the characteristics of the MZ generation, such as ‘Mysider’ – a pursuit of an independent self-centered life, ‘Saladent’ – combination of student and salaryman to describe someone who endlessly strives for self-development, ‘Keep it 100’ – a reminder to act in honesty to oneself, etc.

In the future, CEO Hak Cheol Shin will, in reverse, become the mentor and guide the young employees on the organization’s vision.

The ‘Co-Mentoring’ Program was fully launched this year with the intention of facilitating effective communication and creating working synergies between the Company’s management and the employees, as the number of MZ generation employees rapidly increased and now comprises 55% of the Company’s employees.

Through an application process, LG Chem selected 30 executives in each division, including CEO Hak Cheol Shin, heads of each business division, CHO, Management Strategy Officer, Business Officer, and R&D Officer, and 110 entry level/specialist employees. Their average ages are 29 and 54, respectively.

A two-way mentoring will be carried out for 3 months, with the roles of the mentor and mentee being rotated and the program being organized in various ways according to each individual’s needs.

In addition, there is time for mutual interaction by experiencing culture and games that are popular among the MZ generation such as the ‘Squid Game, MBTI, and virtual overseas tour, etc.”

Also, mentoring can be conducted at any location selected by the mentor, whether it be in the office or outside.

CEO Hak Cheol Shin stated, “True cooperative synergy can only be created when mutual understanding and empathy is obtained through communication.

We will continue to innovate new communication methods to achieve understanding between generations.”

CEO Shin has so far held 20 ‘speak-up table’ events with various organizations every month since being appointed as CEO. He has been enhancing various communication, including quarterly town hall meetings with the employees of the Company. 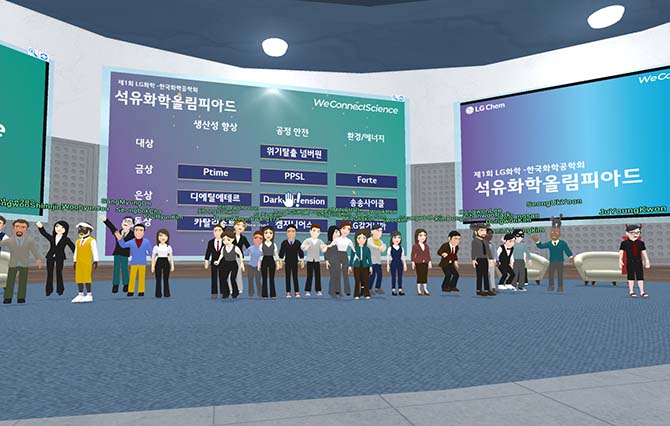